If you’re just tuning in, you might be wondering what my current infatuation with the Dutch Oven is all about.   Just a few months ago, I didn’t fully understand what a Dutch Oven was, nor did I think every home cook should have one…but I’ve since changed my mind.

Let’s start with the basics.  A Dutch Oven is not an oven and I’m not sure if it’s even a Dutch invention. A Dutch Oven is a large, heavy pot with a tight fitting lid that can be used on the stovetop and in the oven.  Originally created to be used with open flames, Dutch Ovens are exceptionally versatile; almost any cooking task can be performed with a Dutch Oven.

Most of today’s Dutch ovens are made from cast iron and then coated–at an extremely high temperature–with enamel.  The enamel elevates the pot from a Pioneer mainstay to a workhorse in today’s kitchen, because clean up is a breeze.  With the enameled pot, you don’t have to worry about seasoning your cast iron or even rusting.  Most of the enamel covering resists chipping or cracking even at high temperatures, which makes an enamel coated Dutch Oven practically indestructible. Once you acquire a Dutch Oven, you won’t need to replace it. Ever. You could probably even pass it on to someone when your cooking days are over!

Why am I just finding out about Dutch Ovens?

To be honest, I’ve been aware of the King of Dutch Ovens–Le Creuset–but they’ve always been WAY out of my price range. I’m not saying they aren’t worth it, but I just could never afford one. But nowadays Dutch Ovens are made by all kinds of manufacturers, not just Le Creuset, and the price difference is astronomical. A new Le Creuset costs more than $300, but you can now find a perfectly acceptable Dutch Oven for well under a hundred dollars. My first Dutch Oven is from the Food Network. It retails for $100, but my sister got it with one of those Christmas sales and % off offers, bringing the price down to below fifty dollars. What a bargain!!

In addition to the substantial price tag, I avoided getting one, because I thought I could do it all with a good slow cooker and my everyday pots and pans.

The one thing I never cared for with slow cooking is how it cooked meats. If you really want flavorful meats, you need to brown them first and that’s something the slow cooker just doesn’t do. Sure, you could brown your meat on the stove first, but that means dirtying another pan and that takes the convenience out of slow cooking.

With the Dutch Oven, you can start your meat-based meal on the stove top and then effortlessly transfer it to the oven for a nice even cook.  No extra pans to clean and all of those flavors are locked in!

Slow cookers are, well, slow. That’s the beauty of them, of course. Cooking your food slow is convenient for the working cook and it allows for more tender meats, but the long cook can be difficult to time and not always convenient for someone trying to get a meal on the table.  Plus slow cookers have difficulty with certain foods such as fish, pasta and dairy.  Dutch Ovens heats evenly–just like a slow cooker–but it does it faster. My traditional Italian Vegetable Soup and also my Beef Stew we’re ready hours faster than the slow cooker version–plus I was able to brown the meat first, which goes to my point of taste (see above). 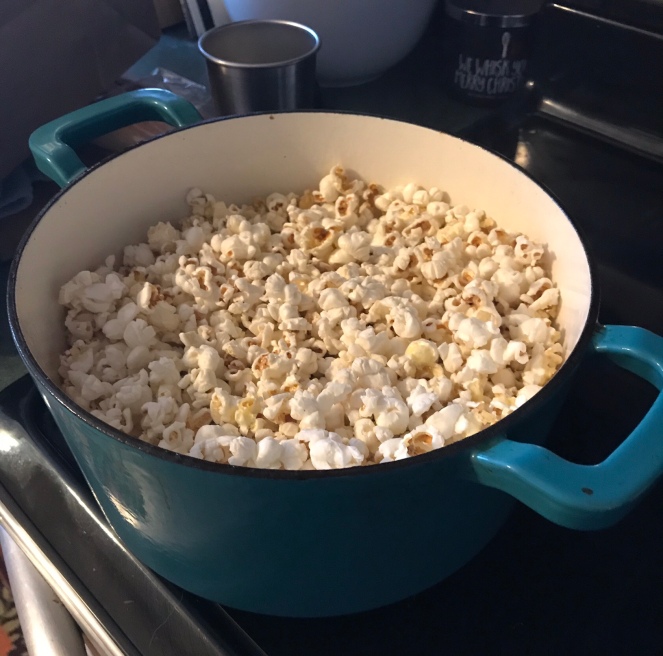 Dutch Ovens are capable of just about everything!  Soups and stews requiring a long, slow cooking time are a snap, but the Dutch Oven can easily handle frying, baking and roasting with ease!  They heat food evenly, so you don’t have to hover over your stovetop.  The tight-fitting lid traps in the heat, too.   Dutch Ovens can go from your stove top directly to the oven without worry.  Plus they are so easy to clean!  And, because of the myriad colors available, they are attractive compliments to your kitchen.  Actually since receiving it, my Dutch Oven has only left my stove top for cleaning–which is good because they are heavy!

I’m not going to lie, I love making bread.  The entire experience is just wonderful!  But bread making was always so time consuming!  When I was in a pinch, I did what we all do…bought bread at the bakery or grocery store.

But there is nothing more satisfying than making your own bread.  Plus if you make your own bread, you will win the respect and admiration of your entire family!  Believe me!

One of the first things I made in my Dutch Oven was a loaf of bread and after that, I was completely hooked!  Interestingly the Dutch Oven is *perfect* for creating and sealing in the steam that makes the outside of your bread so crusty and delicious.  Here are two bread recipes I’ve done in my Dutch Oven–Crusty Bread in a Dutch Oven and Recipe: Crusty Italian Bread in the Dutch Oven

And that, my friends, is why I have fallen in love with my Dutch Oven.  Do you have a Dutch Oven, too?  Why not let me know what you use yours for!

Published by Miss Rita to the Rescue!

2 thoughts on “Why I love my Dutch Oven”